For the last few years I’ve been working with Vienna, a photographer and fellow creative at Accent Interactive. Having just completed a new portrait photography project, she was eager to reflect on the creative process. I asked Sue, a writer, to interview her for this piece. 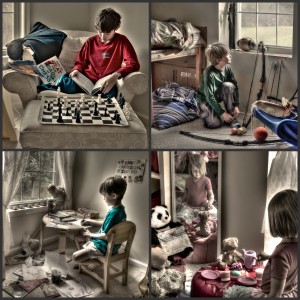 Sue: How were you introduced to High Dynamic Range photography?

Does HDR work for any sort of photo?

It’s most often used for shooting buildings and landscapes. But after studying the HDR tutorial by Trey Ratcliff, I saw a huge range of possibilities. I couldn’t wait to try more.

So what did you try?

After experimenting with some plants outside, I decided to try portraits of children. I’ve known these kids for a long time and spent a lot of time with them. So I knew their uniqueness and personalities. They were comfortable with me, and I with them, so that made it work easily. Because I wasn’t working on a client project I felt free to experiment with new techniques.

It took some of the stress out of the learning curve.

What did HDR allow you to do that traditional photography did not?

I wanted everything to be visible in the photos—the stuff in the corners, on the windowsills, everything. Usually the toys on the windowsill would be lost in the sun’s glare. Anything under a chair or table would be a dark blob. But I didn’t want anything to get lost. I wanted lots to catch the eye.

What challenges did you face during the creative process?

I was fooled by an early success. Spencer’s photo worked so well that I expected the others to be as effortless. But it didn’t happen that way. Instead, I spent a lot of time in that “tension” part of the creative process. For example, in my first shoot with Tennyson, I depicted him sitting at the piano. I liked the composition of the photo a lot, but it was much too stark and simple compared to the detail of Spencer’s photo.

That’s when I realized I needed to think of the photos as a whole, not as individual shots. I tried to imagine them hanging on the wall. What did I want them to have in common?

What commonalities did you decide on?

I decided that all the shots would be indoors with a white wall as background. That the child would always be the same size relative to the rest of the room. And that the children’s shirts would be the target for the saturated color. These limits helped free me up to compose the next three images.

Does one photo shoot stand out as being particularly challenging?

Each shoot had its challenges, because each subject was so unique. Spencer was the easiest because his came first, and I had total freedom to try everything. I had no parameters yet! But his setup took the longest because I was just trying things out. The challenge with the others was trying to let their personalities shine forth while still tying them all together.

Geneva was the wiggliest—she’s the youngest, after all. She was also the most opinionated.

About how she wanted to pose, what she wanted in the photo with her, what she’d wear (laughs).

What did you want to capture with Geneva?

That she’s girly, but not girly. A bit sassy. I tried to do that partly by changing up her body language. The boys are all in profile, but Geneva has a little twist to her posture. And I shot her from behind, capturing her in the mirror. What little girl doesn’t spend time in front of a mirror?

It sounds like each subject offered a different opportunity.

That’s right. Benjamin wasn’t a little boy any longer, but he wasn’t a teenager yet. So I wanted to capture that. I also wanted to show that he’s a thinker. A strategic thinker, which is why he likes chess. I wanted a quiet feel for Benjamin’s portrait.

Tennyson loves sports and the outdoors. How could I show that yet stay true to my parameters and keep him indoors? He’d be itching to go outside! I decided to use that itchiness: I posed him tying his shoes, his sports gear surrounding him. He’s almost ready to dash outdoors where he most wants to be.

Why did you decide to print on glass?

It was another opportunity to try something new. Jennifer, who I was creating these photos for, likes clean and modern. With glass, there is no frame, no canvas, nothing to distract from image. The colors are vibrant, the details very precise. Glass brings out everything that is best about the portraits.

What did you discover about the creative process?

I discovered the benefit of learning something new and then immediately applying that learning to a big project. It’s easy to learn a new technique, not use it again for six months, and have to relearn everything you forgot. This project really drove home the learning for me.

That’s a great principle. What else did you discover?

I learned the benefit of seeking feedback all along the way—as opposed to waiting until I’m done. Many times when I showed my work-in-process to someone, I came away with a great idea I would not have thought about on my own. So feedback gave me fresh ideas along the way. All that input was making my creation better.

What did you find most satisfying about this project?

It’s the first portrait project I carried out myself from start to finish: the concept, composing, shooting, production. I had people around me to offer guidance, but they weren’t there to make up for my shortcomings. If I needed to learn a new software or technique, it was up to me to learn it…and use it.

This really opened my eyes to photography as art, not just business. I had learned photography in the context of client work: head shots, building shots, products, that kind of thing. I’m inspired now to see what else I can do with photography, to experiment, to have fun.

So what are you going to try next with these new tools in your toolbox?

I’d love to try taking a landscape picture of a city at night. I’d shoot it from above, looking down at traffic and people. I want to see what effects all that movement might create using HDR techniques. Also the dramatic effect of the lights against the night sky offers endless opportunities for post-production.

Vienna made a big shift during this project: she went from learning a new skill to expressing herself in her creative work. That’s the value of coaching—you aren’t just learning new skills, you get help accessing your creativity to use the skills in the way that aligns with your passion. The result: maximum impact.

That’s a good day at the office.