We have all felt this: “I could be perfectly creative if only I had the right ________ (computer, software, environment, collaborator, caffeinated brew, etc.).”

Our creative team decided to challenge that assumption by stripping away our usual tools, putting ourselves in newly-formed trios, and throwing ourselves into the busiest and most chaotic venue within reach: Midtown Manhattan.

We were accustomed to working individually or in duos. Trios offered the benefit of specialization. We no longer had to be jacks of all trades. Each person could operate from his or her core strength. Big bats for the big city.

Trios also added a new ingredient to our interaction: a dissenting voice. The potential was greater for someone not to fall in love with an idea. Then what?! 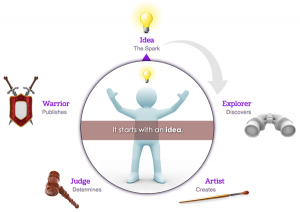 The trio configuration significantly changed the creative process. First, a dissenting voice gave the role of the judge more prominence. That meant more analysis and evaluation. Will this idea give us what we want? Is it feasible considering our available time and resources?

That analysis led to the second change in the process: the timeline shifted. 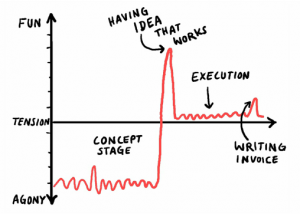 Trios typically take longer to get to an idea that works. For us, that meant more drawn-out tension. But once a trio got to their winning idea, the release of energy was that much sweeter. And the fun really began!

What’s a creative adventure without a wild card? We hoped for someone who would shake things up a bit. And we found him.

Our provocateur was composer and trombonist James Hall. When we entered the French bistro to meet James, we were a weary and uncertain bunch. We couldn’t yet imagine what our New York weekend would yield in terms of actually creating something. James charmed us. He inspired us. He filled us with courage. We left his presence convinced we could take on any and all creative challenges thrust upon us.

But showing is always better than telling. Here’s how we experienced creating from a place called New York. Soundtrack by James Hall.