If you are creative, you’ve encountered this problem. You never know when an idea will hit you, and when it does, you know that if you don’t capture it soon, it may be lost forever.

So you might grab a napkin, or a post-it note, or whatever and jot down the idea. Whew! Got it. Now what? Over time, the ideas keep coming, and so do the little scraps of paper. Eventually it’s time to sit down and really create the thing, and where are all your little nuggets of gold? Hmmm…they must be around here somewhere…let’s see.

As a client recently told me, “I think I’m ready to start crafting this new business idea, but my ideas are so scattered that it’s going to take me a while just to find everything and start to focus.” Not the most efficient way to get started. In fact, the effort of collecting everything might prevent you from taking a few small steps in the right direction. There must be a better way.

What you need is a way to capture any idea wherever you are. Ideas will come to you when you are driving, walking, eating, in the shower, during a boring meeting, even in bed. Do you have a good way to capture the idea? If not, revise your system now.

I’ve found two ubiquitous capture solutions that work for me. One is the paper approach. Here I carry around a notebook that is small enough to take anywhere. I like Field Notes but any small notebook can work.

For a standout example of the paper approach in practice, see Twyla Tharp’s box approach found in The Creative Habit

See also puzzlemaster Will Shortz describing how he uses index cards to capture ideas for making puzzles (from the documentary Word Play).

Recently I’ve switched to using apps for ubiquitous capture. I usually have my phone with me anyway, and having the same tool on my iPad and Mac means I can dig in deep with a big screen when I want to develop the idea further.

The best tool I’ve found so far for this is Evernote. I like it for all the advantages above, and because it’s particularly well designed for sloppiness (who can bother to organize ideas when they are flowing fast?), it’s good at syncing (always available from any device), and it comes from a thriving development community.

Experiment with different tools and pick the one that has the least friction, that has you dumping your ideas the quickest. 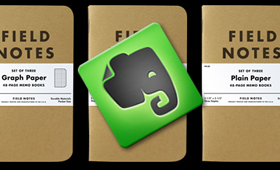 For best results, pick paper or plastic, but don’t mix them.

The test of your system is simple.

If the answer is “yes” to all three, then you have a great ubiquitous capture system.

You might pick different capture methods for different projects. I find that some projects lend themselves more to the paper approach. For other projects, digital is the way to go. But if I’m using two systems, I have to carry both of them with me all the time, or it doesn’t work. Mixing paper and digital in the same project can lead to frustration.